‘Who decided that a helter-skelter, Ferris wheel and festive market were appropriate for a Tier 3 area?’: Gedling MP Tom Randall demands answers from Nottingham City Council after crowding at Christmas event

Gedling MP Tom Randall has told Nottingham City Council that people across the borough are feeling ‘immense frustration and anger’ over their decision to allow this year’s Christmas market to go ahead – despite the area being in tier 3 restrictions.

The market was suspended after 24 hours, before being scrapped altogether, after pictures showed huge crowds of people, with little or no social distancing evident.

In a letter to City Council leader David Mellen, sent yesterday (December 7), Mr Randall wrote: “Who decided that a helter-skelter, a Ferris wheel and a Christmas market were appropriate for a Tier 3 area?

“This weekend, I have received dozens of e-mails, as well as tweets and Facebook comments, from my constituents complaining about Nottingham City Council’s decision to hold a Christmas market in the Old Market Square.

“Saturday’s market was described as ‘rammed’.

“We know the problem that we face: rates of Covid cases amongst the over-60s, while falling, remain high, as are the number of local hospital beds occupied by Covid patients. These are the reasons why Nottingham, and its suburbs, have been put into Tier 3 restrictions.

“You will understand the immense frustration and anger of owners of hospitality businesses in Gedling, who have been forced to close their business, while watching hundreds flock to your Christmas market. You will also understand their worry that, if your market helped to spread COVID, the lifting of those restrictions could be delayed further.”

Mr Randall has now asked for answers from the council over their decision to hold the event and also about the safety measures that were meant to be in place.

Nottingham City Council’s Dave Trimble, who is responsible for major events in the city, has since issued a public apology, calling the decision to hold the Christmas market ‘a mistake’.

He said: “I think hindsight is a wonderful thing, and given what we know now, absolutely we definitely got it wrong, and I’m very very sorry for that.

“Certainly anything else that happens during this time we will certainly not be putting any new events on.

“The market started off quite well, but during the afternoon and early evening it went wrong.

“There were three things that went wrong: there was the food offer – with the restaurants being closed, a lot of people went there at the same time;  the opening up of non-essential shops across the country – so there was a lot of pent-up demand there, we had taken the view that with all the other shops being open the market would be a part of that; and the third one was a really selfish group of around 200 people who gathered at the council house, and decided to have a party.

“What we had to do is act as quickly as possible, and we reacted by announcing we wouldn’t be opening it the next day, and quickly after that we decided we would be closing it for the whole duration.” 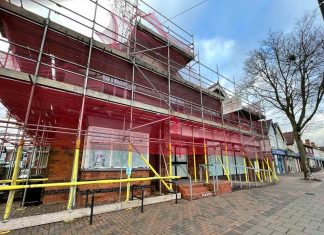 Council panel to decide on licence application for new pub at...

‘It’s what you’d expect from the Middle East or China’: Gedling...